Another extremely bad, extremely cheesy game from Capstone, the "nadir of computer entertainment." Terrorists have taken control of the UN building in New York, and you are part of the assault team assigned to take it back. Yawn.

The game's cliché premise is matched with an equally insipid gameplay: similar to its spiritual successor Corridor 7, Operation Body Count boasts hordes of terrorists that look the same and pose virtually no threats whatsoever. The game does attempt to rise above DOOM clones by allowing you to give orders to your teammates (when and if you find them), but the game is so easy-- and your teammates have the same intelligence as a rock-- that you hardly need to bother with it. Add poor graphics, boring level, stir-- et voila, another Capstone Real Dog. Stay away from this one, lest you think I didn't warn you ;) 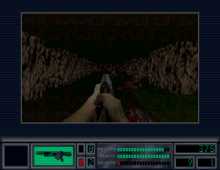