N.Y. Warriors is a fun top-down shooter that recalls Quicksilver's Heavy Barrel, although it is much less well-known. If you've played Konami / Data East / CAPCOM arcade games, you already know the drill: as a lone commando, your job is to rescue New York City from various gangs that are wrecking havoc. Each stage takes place in a nondescript New York location, with varied backdrops and excellent attention to detail (e.g. snoring bums on benches who are oblivious to all the mayhem taking place around them). What makes N.Y. Warriors a lot of fun is the variety of enemies and weapons you can pick up and use. The gangs that control each location also have their own attack styles and weapons, and naturally the challenge increases with each location you advance. Another high point is the fact that each mission's objective is different: in some locations, all you have to do is get from point A to B without getting killed, while in others you may be asked to secure a bridge by destroying guarding tanks. The action is furious, and user controls are responsive even with keyboard (although joystick is still the best method). Fans of Cabal and similar commando-type shooters should really enjoy this one, although don't expect it to be a groundbreaking title. 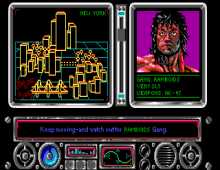