Obliterator is a fine, small and free 360 degree space shooter, with aim no more glorious than achieving a score as high as possible. Luckily, Obliterator plays well and fun indeed. By shooting multiple and distinctive types of enemies, such as the tiny Putput, the Blastor turret and cumbersome Robby the Robot rapidly, the player gains score multipliers. As the multipliers hit 100x, the player ship transforms in to a comet-like, flaming being, unable to shoot, but invulnerable and quite harmful to the enemy ships. A bonus stage, one might say. A new wave of aliens with reinforcements await as the flames die. Luckily, a space truck leaving a bonus weapon or accessory stumbles across the vacuum every now and then.

Playability and clever enemy design make Obliterator an adrenaline rush to enjoy every now and then. And don't forget to read the documentation, as it is quite witty. :) 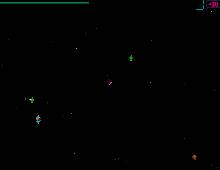