Notrium is yet another excellent release from Ville Mönkkönen, Finnish programmer best known for The Forge and Bikez II, as well as several other superb freeware gems. In his own words: "Notrium is a realtime single player survival game. You have crashed on a strange planet filled with aliens, and your job is to get home alive. You find alien items on the planet surface which you can combine with others to make all sorts of useful gadgets and weapons. The game can be completed in several different ways, and it has a high replay value. Ever read the book about Robinson Crusoe? Notrium is the same, but far in the future, and on an alien planet. You need to keep yourself fed and in good health, while at the same time the aliens are after you. Want to kill them? Build a gun, blast them into smithereens! It's easy to see the aliens during the day, but what will you do when the night comes? Will you stay near a fire to keep warm, or will you wander the jungles equipped with a flashlight desperately looking for items? Maybe you can some day create a stronghold in the jungle, and build a turret to fend off the alien incursion."

The game is essentially somewhere in between the simplistic shoot-everything-in-sight mayhem of military shooters (e.g. Chaos Engine), and the realistic-to-a-fault gameplay of Deus. You will have to constantly blast aliens and other hostile creatures, but you also must deal with real-life concerns such as hunger, thirst, and warmth. In finding ways to deal with these dangers, you will solve rudimentary "puzzles" that adventure fans will have no trouble with (mostly because the solutions are almost always obvious). For example, you will have to keep warm during the day, and combine several items together to make useful tools.

Although Notrium is a bit too short (I finished the game in about 3 hours), there are several reasons you would want a replay. First, there are multiple difficulty levels, which mostly affect the number of aliens you confront. Then there are several different ways of solving puzzles or getting through tight spots, as well as large areas you may not have explored thoroughly the first time. Lastly, there are three species for you to control: human, alien and android, each with concerns specific to that species (for instance, an android wouldn't have to worry about food so much). All in all, Notrium provides at least a few hours of enjoyment to action fans who want something more than brainless gorefests - and may even give you enough reason to replay once in a while. 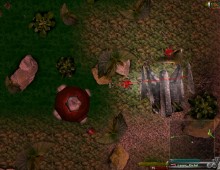