I know it must be a cliche for longtime visitors by now, but this game deserves this: MindArms is one of the best 2D freeware fighting games I have ever played. It is not often that you find a freeware Japanese fighter that is not coded with ASCII's "Fighter Maker" program, and it is even rarer to find one that offers smooth animations and quality graphics. MindArms is one of those rare gems.

Probably the best upshot of the designer coding his own engine for this game is that you won't find any "default templates" in any element of MindArms. While games coded in "Fighter Maker" tend to look and play quite similar to one another, the characters' movements, background scenery, and attack effects in MindArms are much more seamlessly integrated. In addition, the computer AI is more challenging than a typical "Fighting Maker" game, and I like how the game displays the exact percentage of health remaining for each fighter.

Although the number of available fighters you can control is small - only four compared to eight or more in other fighters - this is compensated by the wide variety of moves, combos, and special attacks. The backdrops are also very nice and quite creative: you will find no cliched Dragon Ball Z -style arena in this game. Last but not least, the tunes are quite catchy, and the game has a long and involving story mode (if you can read Japanese, of course). If you like fighting games, MindArms is well worth your time. It is a polished, good-looking, and fluid fighter that packs a lot of gameplay in 5MB of space. 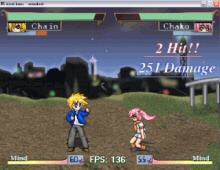