I remember playing this game at my friend's Amiga 500 and it was everybody's favorite. Play as either South or North and beat the other one. The screen above shows the battle of two Southern armies and one Northern. You fight with cannons, cavalry and infantry units in different terrain types such as desert, grassland, river (be careful not to loose your troops in water), canyon... Beware of Indian raids and Mexican riots, hold railroads and try to control the only port in the game - North Carolina. 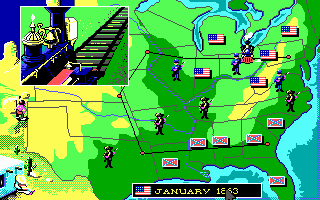