Noggin Knockers 1 and its sequel are "teasers" of sorts to Bloodlust Software's better and more controversial Time Slaughter. They are funny but gruesome parody of classic arcade game Pong, in which two players score points by knocking balls a la Ping Pong. Except that here you have various gruesome objects instead of balls, and equally gruesome players. Either game pokes fun at itself, so don't take it too seriously. 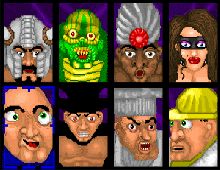