Road Warrior is a superior sequel to GameTek's highly original Quarantine, a politically incorrect roadkill game. As in the original, you still play the role of Drake Edgewater, a cab driver whose only goal is to escape the hell of futuristic Kemo City. Using his cab as the only way to survive, Drake accepts a series of special missions against OmniCorp. The money is used to repair and upgrade his vehicle with new weapons, as each ride into the city is risky business. Thus, from mission to mission through different parts of the town, he finally reaches the exit way to freedom.

In contrast to the loose, uninteresting plot of Quarantine, the plot in Road Warrior is a much more integral part of the game, although it makes the game much more linear. The OmniCorp's leader, Torva Yul, has been told about Drake's actions against the company, and he naturally wants revenge. The game starts as you just reach the exit that leads from the city to the Kemo desert. On your way across the desert, you bump into a large rock that you believe is an oasis. Sometimes, mirages can be very pernicious! Shocked by the accident, you slowly get back to the reality and notice the gang outside staring at you with bloody knifes. They just found fresh meat for the kill duel scheduled tonight at the autodome where you will have to destroy all your opponents to stay alive....

The graphics are much more detailed than Quarantine, this time all in SVGA, with the same hallmarks of violence, blood and a very cynical sense of humor. The biggest difference between Quarantine and Road Warrior lies in the missions. In Quarantine, while you were driving in Kemo City, there were passengers waiting for cabs, and it was possible for you to pick them up at your convenience. In Road Warrior, money is no longer required. Before you start a mission, you have to go to the next pickup location (shown in green on the map). When you pick up the passenger, he/she will explain your mission and the objectives. A neat addition is the inboard camera, which lets you see the passenger if he is joining you for the ride. The other difference (which might frustrate action newbies) is that you have a limited time to complete your objectives, and you can no longer repair your cab, nor buy extra weapons and ammunition.

Despite the lack of Quarantine's freedom, though, Road Warrior makes up for it with a wide variety of missions. Quarantine was a bit repetitive, as you had to deliver a certain number of passengers before any special mission was offered to you. In contrast, Road Warrior is full of special missions. You will destroy billboards, blow up buildings, kill OmniCorp officials, escort vehicles, etc. There is also the guy who ordered me to blow up his van that was just stolen by his ex-wife! In keeping with the game's stronger emphasis on plot, an on-line map shows thirteen different locations you have to go through to reach Kriegtown and the Kemo Prison. Within each location, you have to complete a series of missions, and even passing from one location to another will require you to conduct other missions inside the Kemo desert. With over 100 missions that will take you through the desert, countryside, cities, an airport, a factory etc., with each having a new set of graphics for the environment, Road Warrior will keep you occupied for hours on end. Highly recommended, although Quarantine fans will need to get used to the differences. 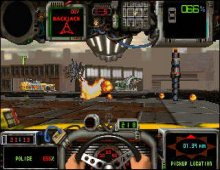 People who downloaded this game have also downloaded:
Quarantine, Crusader: No Regret, Privateer 2: The Darkening, Wing Commander: The Kilrathi Saga