I do not know if the makers of this game were trying to copy Usagi Yojimbo, but if they did they screwed it up big time. A scrolling action game with a ninja rabbit in the main role is not a bad idea, but it must be made good. And this one is not. Still, you might try it out if you really like action games with "martial" arts.

The game gave me a good grin when I played it first. A rabbit dressed up as a Karate-Fighter with something like a sword fighting agains moles and other animals. All this in a nicely drawn environment. Not bad. But well... that's about it, the fact that you got a rabbit that is fighting here makes the game somewhat unique, but the longtime motivation isn't very high. You go around and fight, seen that before, nothing special. Controls are pretty well though and the fighting works ok. No smashhit, but a funny thing for those who don't take fighting games too serious.

Ninja Rabbits is a great conversion of Commodore 64 old game of the same name that stars Usagi Yojimbo, a furry ninja rabbit character. Usagi Yojimbo in turn is a star of a popular US comic strip by Stan Sagai, who created the character based on Miyamoto Musashi, famed Japanese Samurai legend.

The game is based around Usagi's quest to free his land from baddies and save the girl yet again. What set the game apart from most of the other 2D side-scrollers around that time is the fact that decisions you made on who to talk to and who to attack would alter the way you played the rest of the game. Slaughtering a civillian, for example, would give you bad karma and might turn the whole town against you. This is similar to Origin's Moebius, but with a much more immediate effect. This makes gameplay in Ninja Rabbits very refreshing and deeper than most other side-scrollers. Although the levels can be better designed, beautiful backdrops help sustain the game's attractiveness. Overall, if you enjoy action games with a difference, Ninja Rabbits fits the bill. It's not the most fluid or playable game on the market, but it is one of the most original-- with a cool ninja rabbit to boot.

Conversion of the commodore game Ninja Rabbits to PC. You have to save your land from the bad guys and save the girl. You can choose wether you want to talk to someone or not. And killing a civilivian may have bad impact on you. The levels are nice designed with much variety inside. 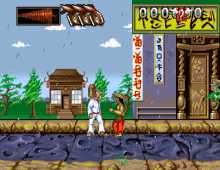 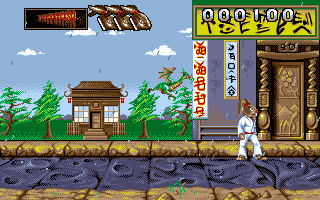 People who downloaded this game have also downloaded:
Space Harrier, House of the Dead 2, The, Jazz Jackrabbit, Horror Zombies from The Crypt, Paperboy