SEGA's arcade 3D shooter brought to the IBM-PC. The arcade game was fantastic for its time (1985) and mainly lived from its great graphics and sounds. Most conversions were unable to capture anything from it, and Space Harrier is no exception, although unique gameplay still makes it better than many games of that period.

Space Harrier is a shooter where you, as Space Harrier, must fly through the Land of Dragons to defeat the evil beings who would dare put the dragons in peril. You do this by flying straight at them with a big cannon, and what a cannon it is. Not only does it have unlimited ammo, but it appears to have a "happy face" on the back (two dots for eyes and a curved area for a smile). Was this smile a happy nod to the game's beautiful graphics, explosions, and intense action?

Before the days of first-person shooters where you could sneak up on your opponents, Space Harrier let you take control of a guy running and flying directly into other foes who used the same tactic, leading to some frenzied clashes and more than a few mid-air collisions. Although the checkered backgrounds make the world look more like a surreal painting than an alien planet, the fact that they constantly scroll straight at the player gives a sense of speed, which is often good as a warning when navigating dangerous areas with indestructible buildings. The double-checker levels like Ceiceil are especially gratifying when the ceiling drops down, checkers flash different colors on both floors, the scroll rate speeds up, and enemy Binzbeans fill the screen. Extra details like different poses when at different parts of the screen, explosive chain reactions when defeating the largest bosses, and stumbling over the low weeds in the first levels made the game something to behold. Then of course there were the levels where the local dragon Euria decided to thank Space Harrier for lending a hand. So how can this creature help a flying bazooka-man who has everything? Give him a ride, of course. By jumping atop the big fuzzy dragon in two bonus stages, you have the chance to demolish a variety of objects, some of them otherwise indestructible in the game. If you and Euria destroy enough, Harrier can get an extra life. Complement the great visuals with anime-inspired robots and jets that look straight out of Macross and Robotech, giant skeletons, upbeat music, crisp sound and perfect shooting control, and you'll know this is nothing short of a gaming classic. It may not match the arcade original in terms of graphics and sounds, but original concepts and dragon-riding levels are enough to merit a Top Dog status. 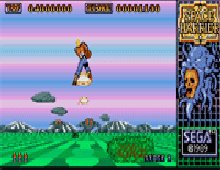 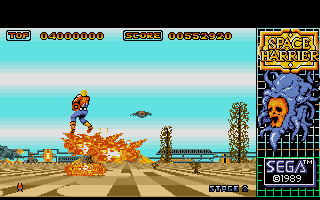