What a weird game. Don't think I'd have the slightest idea what the goal of this one might be. But on the other hand I am a big fan of Monty Python and if you know that great series (the films are great too, but they don't help you with this game) you'll recognize some familiar things...

Just don't get confused by unexpected things that happen, coz' - well - that's the concept of the game. The graphics are made up in the style of the legendary cartoons you might know from Monty Python's Flying Circus and so is the gameplay. Run around as a man, swim as a fish - and now for something completely different... Have fun!

Monty Python's Flying Circus is a hilarious action game based on the much more hilarious TV series of the same name starring Monty Python, UK's best-known comedy group. You control one of "Mr. Gumbies" from the TV show who is on a quest to recover 4 parts of his brains, which decided one day to run away. (if you have never seen a Monty Python skit, none of this would make any sense. Actually, even if you did, they wouldn't make sense anyway :)). Mr. Gumby typically fly across various screens, throwing fish at flying feet and other surrealistic enemies from the series. Your objective for each level is to reach "an argument," a mini-game that changes from level to level. (most employing non-sequiturs that Monty Python fans will appreciate, such as a lesson on "the larch," or a quick game of Breakout).

The game is fun to play, easy to control, and oozes (yes, oozes) plenty of Python-esque humor (your score goes down the better you do, for example - the lower the score you have, the better). Monty Python fans certainly can appreciate the humor and references to the series, but the game is a lot of fun even if you've never heard of them (and if you haven't, you owe it to yourself to watch the group's incredibly funny Quest For The Holy Grail movie). Highly recommended!

If you're a fan of the Monty Python humor then you're gonna love this one. This game is totally crazy. You play the not so smart character from the series (Gumbo or Gumbold, something like that). Anyways your brain seems to have split into 4 parts and decided to run away, so it's up to you to get them back. You do this by playing through the game until you reach "An Arguement", if you do well in these arguements you win back a piece of brain. In the game itself you are armed with fish to shoot at the bad guys, your score goes down the better you do (Yes, the less your score is the better you've played). This is packed with Monty Python humor and I had a jolly good time playing it. 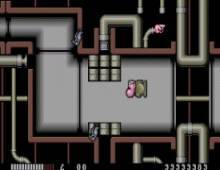