Monospace Shooter is one of the best freeware shoot 'em ups you'll ever come across. It features very smooth-scrolling action and an excellent graphical detail even in a limited white-on-black palette (hence the name "Monospace"). There is also plenty of enemies, power-ups, a final boss, and a great control interface. On the downside, the game only has one level, but at least you will have fun with it before it's over. The game was never finished because its designer, Milo Sedlacek (a.k.a. "Gradius"), passed away from leukemia in September, 1998 :( May his game live forever as a testament to a wonderful QBasic programmer who selflessly devoted time and efforts in coding awesome games and helping other programmers. Highly recommended, and may you rest in peace, Milo.

Note: this download version has been hacked by a fan to play in full-screen mode. 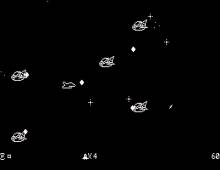