Billed as a game that is "part Asteroids, part Robotron, and part PaintShop Pro," mono from freeware developer Binary Zoo amazingly fits the bill quite well. Although not a revolutionary game by any means, Mono is unique enough to merit attention from every SHMUP fan - and lovers of creative games in general.

mono is hard to describe, so here is an excerpt from the Readme that might do the job: "The aim of the game is to change the colour of the entire screen from black to white or white to black. This is achieved by shooting the alien blobs that colour the background when destroyed. There are 3 colours of blobs to shoot (red, green and blue) and the colour they leave behind changes the behaviour of any enemies that travel over it. A sort of "player controlled difficulty curve" where the more of the screen you colour, the more the enemies behaviour changes.

Travelling over the 3 colours effects the enemies in the following ways: RED - Enemies are more likely to return fire; GREEN - Enemies speed will increase BLUE; Enemies will home in on player. The player loses energy when hit by either bullets or an enemy. The bigger the enemy, the more energy lost. Additionally being hit will result in some colour from the surrounding area being removed.

mono is designed to have no permanent on screen information displayed. Only the percentage of the game complete is displayed when it changes. There should be enough audio and visual clues as to the amount of energy remaining. There are two different game styles [called] "Black" and "White" and they differ only in the starting colour of the background."

Although it sounds strange, mono is incredibly easy to learn - the controls are as simple as any other shoot 'em ups, but the unique and complex gameplay will grow on you. The graphics, like all other Binary Zoo games, are minimalistic but pretty: in this case they are even hypnotic, not unlike Spheres of Chaos at its most hectic, but here the colors are actually integral to gameplay. Watching the color "imprints" of various enemies blend into each other and fade is never boring, and after a while it does feel like you are creating some cool abstract art while blasting away. A nice soundtrack rounds off this cool game that proves there is always room for new ideas in the SHMUP world. 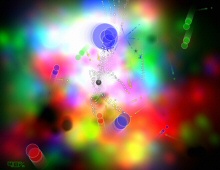