Molecule Man is a nice Windows remake of a 1985 game of the same name that was published by Mastertronic for the Commodore 64, Amstrad CPC, Spectrum ZX, and most other 8-bit computers except the PC. As Molecule Man, your objective is to escape a radioactive maze before getting a lethal dose of radiation.

Although Molecule Man looks at first glance like a simple isometric maze game, it is more sophisticated than 3D Monster Maze and more similar to Spectrum classics like Knightlore. The only way you can escape from the maze is by using the teleporter, but you can only use it only after you have collected all sixteen sections of the level's circuit board. To keep the radiation dose down, you also need to periodically take anti-rad pills. You start the game with twenty of these, but you will quickly use them up, and must search the maze for anti-radiation pill vending machines. But of course, these machines need money to dispense pills. So you must also collect coins that are scattered around the maze. Also around the maze are bombs which can be used to destroy sections of the maze walls, allowing you access to new sections.

With fun, no-frills maze action, Molecule Man is a fun poor man's version of Knightlore. It was released originally as a budget title, and came with a nice maze editor. This Windows version is coded by Robin Thompson, the original designer himself, and released as freeware under the GNU General Public License. The gameplay remains identical to the 8-bit classic, down to the easy-to-use maze generator you can use to create your own mazes. If you like maze games, Molecule Man is well worth your time. Recommended! 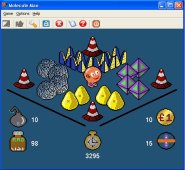