One of the first games produced in the Western hemisphere that are based on Oriental motif, Moebius is an ambitious design that didn't quite pull it off.

Your job, as disciple of the Headmaster, is to recover the Orb of Celestial Harmony from disciple-turned-badguy Kaimen. To do that, you must train your body and soul in the best tradition of Chinese warriors: to "walk the path of Moebius the Windwalker." Although gameplay is similar to standard RPGs, there are some neat differences: in addition to familiar character statistics such as dexterity, you also have karma, a crucial attribute that goes up or down constantly depending on your deeds. Frighten a citizen with your sword, and your karma will drop; defeat monsters in battle, and it will rise. Combat is also played in a neat 2D side-scrolling view similar to fighting games, and you have a wide range of attacks to use, including even shurikens and fireballs if you are experienced enough.

Despite original Chinese folklore setting and cool arcade-style combat, however, repetitive quests and "canned" dialogues drag down the game's potential. Even the fun combat sequence will wear off after you have tried all the moves and weapons. The bottom line: play this for nostalgia, then go play its much-improved sequel Windwalker instead :) 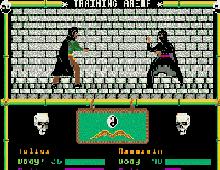