High atop a craggy cliff, guarded by an army of fierce warriors, stands the fortress of the evil warlord of Akuma. Deep in the darkest dungeon of the castle, Akuma gloats over his lovely captive, the princess Mariko.

You are one trained in the way of Karate: a Karateka. Alone and unarmed, you must defeat Akuma and rescue the beautiful Mariko. Put fear and self-concern behind you. Focus your will on your objective. Accepting Death as a possibility. This is the way of the Karateka. Thus begins the story - now fight your way through. A surprisingly good fighting-game - fun, not too hard to master the controls and not too easy to finish.

It wants to be played from disk... so well... copy the files to a floppy-disk and run from there, should work without problems.

One of the first fighting games ever made, Karateka is an excellent side-scrolling gem that catapulted Jordan Mechner (Prince of Persia series) to fame and fortune. The plot: as a trained master Karateka, you must invade the castle to rescue Princess Mariko from the clutches of evil Akuma. The game shows some promise to his later titles with smooth "believable" animations and a movie-like atmosphere. MobyGames describes the game's appeal in more detail:

The finest aspect of Karateka, and one that hasn't lost anything due to the game's age was how well Jordan Mechner could tell a tale with nothing but visuals and musical cues. There is no dialogue, not even text. Characters merely make gestures and the music plays their mood so wonderfully that one knows what the characters are 'saying' without hearing/seeing a single world. It's brilliant and such an achievement has only been achieved a few times in the history of gaming. For their time frame, the graphics were well done. Crisp, clean, and effective, they were exceptional for when the game came out. [And] at the time, the basic concept (running down the hall fighting opponents in a very simplified fighting game style) was enjoyably fresh.

The Bad: gameplay is very repetitive, as you face off against tone lackey after another with minimal to no difference between emplyess. The fighting style, an early fighting game type of engagement, lacks finesse or true style. You more times than not wind up just mashing buttons until you connect...often using the same maneuver again and again in rapid succession. Aside from a few surprises (like Akuma's falcons attacking), there's little difference between your opponents or how you fight them. The difficulty level, mixed with the controls and repetitiveness, might [also] scare away many poeple who will find this game somwhat hard and frustrating."

Overall, Karateka is one of the earliest side-scrolling fighting/action game that is a classic in the way it tells the story, and bodes well for Mechner's later classics. Highly recommended! 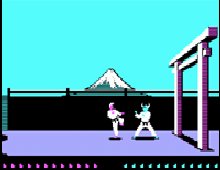