A classic and one of the best C64 games ever made was also ported to PC. But since PC is a much stronger machine, this game is just about an average product.

How come evil scientists always want to rule the world? And how come it is impossible to kill them, no matter what you use? Dr. Elvin Atombender is back and has a new headquarters set up.

The game plays the same as the first part, but Impossible Mission 2 is even more impossible then before! The towers are bigger and harder to complete, damn robots are now smarter and you need a lot more time to get to the mad doctor. The graphics are better, the sound has many more digitalized voices and many other improvements. Still, it is the same game and that's its best characteristic!

Another great game that defies simple description, this is the PC version of yet another hit Commodore 64 game. It's a platform action/adventure where you infiltrate a hi-tech building to stop an evil plan. Despite this hackneyed plot, dodging the robots while getting clues from the various computer terminals is a lot of fun. After it was first released in 1987 in CGA, Konami released the EGA/VGA version in 1989 with much improved graphics and sounds that finally rival the C64 version. 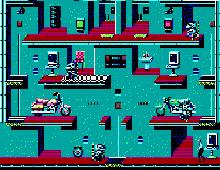 People who downloaded this game have also downloaded:
Paperboy 2, Marble Madness, Battle Chess for Windows, Prince of Persia 2: The Shadow and the Flame