Another excellent ASCII game by Scott Miller of Apogee game, Meteors was included on Softdisk's "Big Blue Disk" number 30. Here's a summary of plot and gameplay from the game's instructions:

"A terrible catastrophe occurred only minutes ago... an urgent distress signal from the USS Sagan, our largest scientific space station, stated that they were being torn apart by an uncharted meteor storm. Your scout ship is the closest vessel to the region. Your mission is to fly your ship to quadrant B32 and rescue as many of the survivors as possible. Hurry, their air supply will not last long.

To navigate the Space Eagle through the meteor shower use your LEFT and RIGHT cursor keys. Rescue the survivors by touching them with the ship. Each sector will contain additional fuel canisters, shields, and missiles that can be used to reprovision the ship. If you need to take a break, just press the letter "P" on the keyboard to pause the game. If you wish to quit the game just press the letter "Q" on the keyboard.

Your ship comes equipped with 10 antimatter missiles, which can be used to destroy meteors in the way. To fire a missile just press the UP arrow key or the letter "M" on the keyboard. Your ship can absorb meteor hits equal to the number of shields you have, the next hit could destroy you. Use the hyperspace matter transferal device only as a last resort, since it consumes a large amount of the ship's fuel."

The game is a lot of fun, and a great proof of how much you can do with just ASCII characters ;)

Meteors came on a monthly disk based magazine called Big Blue Disk in 1989, issue number 30. Ascii graphics. Fly your scout ship through a meteor storm and save survivors of the USS Sagan before they run out of oxygen. 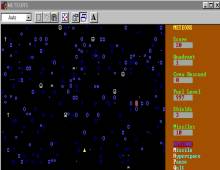 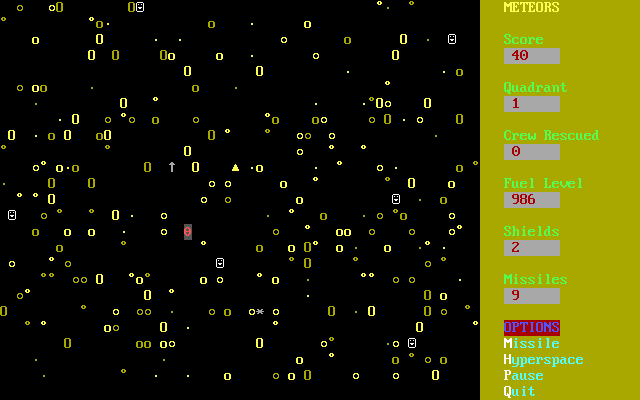 People who downloaded this game have also downloaded:
Meteor, Prince of Persia 2: The Shadow and the Flame, Gauntlet 2, Time Quest, Frogger