Meteor is a fun top-down on-foot shooter game that is reminiscent of Cannon Fodder and Commando, among others. You play Sergeant Ash, diehard soldier whose mission is to recapture the control center of a space-based weapon from a group of terrorists. To do this, you go through 13 main missions, each with its own objective ranging from object retrieval (usually some color-coded keycards), to search and rescue, to enemy elimination.

Although a pretty standard shoot-everything-in-sight kind of game, Meteor features some puzzle and strategic elements to make things more interesting. In some missions, you will need to disable force fields and raise bridges by finding and activating switches and buttons, taking cover behind friendly units who will attack enemy units they see, and even use helicopters to fly you over destroyed bridges or out of danger. There are ten weapons in total, each with its own characteristics and many requiring ammo to use.

The game's user interface is not very intuitive: the right mouse button is to aim, and left button is to fire. But once you come across automatic-fire weapons, the advantages of this scheme becomes clear. One gripe I have is that you must move Ash in absolute directions (i.e. up is always toward the top of the screen no matter which direction he is facing). He also seems to move a bit far too quickly - this makes getting into small doorways a tedious affair, although slowdown programs seem to help.

To round off this excellent freeware old game, Meteor includes a full suite of game-editing tools that let you customize and build your own maps, as well as units and weapons. If you enjoy military shooters, Meteor is an excellent old game that will keep you entertained for hours. Highly recommended.

Meteor is a look down military shooter that runs under Win32 DirectX where you control the main character in real-time. The concept of the game is to stay alive, pot the baddies and complete the mission objectives for each mission. The bad guys come in numbers; they are smart and well equipped. To help you overcome this problem you are provided with a number of weapons which you can find as well as other useful items in the form of power ups.

All of the editing tools are integrated into the game, this allows for a whole range of modifications from new maps to total conversions to be carefully created and played using in one application. The game uses a base directory (similar to games like Quake and Half-Life) system which allows modifications to be built in separate directories for ease of use and distribution.

Meteor is very addictive and at times can be quite strategic. The main thing is that it is very playable, its user friendly and its open to modifications. The control part is a bit awkward though as your character doesn't move around as you want him to but you can easily live with that. 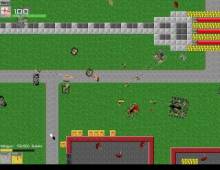