Another fun "cute flying witch" horizontal shooter from Japan, Medicalat features smooth SVGA graphics and addictive gameplay that recalls the best of IREM's offerings. One of the best features in the game is the rocket that accompanies you, acting as a "wingman" that helps shoot the enemies. When you leave it alone, it acts on its own, but when you hold it, it fires a super-powerful "hyper" shot. This powerful special attack takes time to charge and re-charge, so you cannot use it too often. The graphics are crisp and smoothly animated, and the enemies and boss characters look more cute than menacing, although they are not easy to kill.

On the downside, there are only several levels in the game, all of which are sparsely decorated with background graphics. Although it must be said that this minimalist approach works well for the game, because it allows you to concentrate on the foreground action rather than being distracted by the scenery, and the "hyperspace vectors" in the background lends a nice feel of speed and the illustion of depth. Furthermore, Medicalat is also more difficult than your average freeware shooter: I die quite often Level 3 of the "Normal" mode, and the "Expert" mode is aptly named. All in all, yet another quality SHMUP from the impressive Japanese freeware scene. 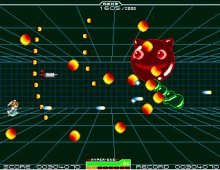