The Machines is an okay overhead shooter game similar in style to Team 17's (vastly superior) Alien Breed or freeware classic C-DOGS. The plot, as is common for this kind of game, is negligible: in the far future, you are in charge of the intelligent robots who, naturally, one day rebel against their human masters. Make your way through dozens of level, armed with various kinds of weapons. You can collect bombs and other bonus items throughout the level, as well as money used to purchase better equipment. There's not much to recommend this game due to repetitive gameplay, uninteresting level designs and enemies, and lack of decent challenge. The upshot is that you can play against another human player in hot-seat, split-screen mode, but even that is little consolation considering how average the game is. 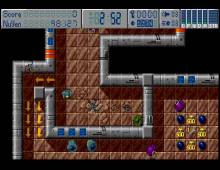