The game lets you play as one (or two, if you have a friend) of eight major characters. In contrast to most other shooters, Olmangzolmang sports a "pseudo-3D" perspective: similar to SEGA's Space Harrier, you view the action from a first-person perspective, watching the waves of enemies and their shots move closer toward you. It is very difficult to gauge the distance between you and the enemy fire, unlike in Space Harrier, but you can always treat enemy fire from a strictly 2D standpoint (that is, dodge the bullets as if they were on X-Y axes). One interesting anecdote about the game: this was made during the final days of Family Productions, when the management was letting go of their employees and cutting salaries. The designers of this game managed one last revenge: the last boss you will face in Olmangzolmang is the President of the company ;)

If you enjoy anime shooters, Olmangzolmang Paradise will keep you entertained for the first few minutes as you check out the cool pseudo-3D playing field and different characters. The game degenerates into repetitiveness beyond the first few levels, though. Worth a try, but not the highlight of this underrated Korean company. 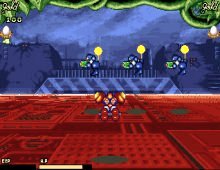