Another underrated released from premier action house Raven Software (most famous for Hexen and Heretic), Mageslayer is an excellent hack 'n slash-fest that rejuvenates the overhead dungeon hack genre pioneered by Atari's Gauntlet over a decade ago. As is typical for this kind of game, the plot is negligible: a cliché premise involving an evil mage named Thane who is planning to take over the universe. It's the gameplay that matters, and Mageslayer delivers in spades. Just choose one of four character classes - the hammer-wielding Earthlord, the hell-spawned Arch-Demon, the fireball-slingin' Warlock, and the busty Inquisitor, and go at it.

Just like the classic Gauntlet, each character has a close-up melee attack and a long-range projectile - and mastery of both is crucial in the game. On each level, Mageslayer throws dozens of nasty monsters at you, triggering very furious (and bloody) fights that are very intense, and very addictive. Strategic elements are also present in the form of monster spawners, which you must kill to stop the endless hordes of the monsters. You can also use magical attacks, which are limited to the amount of mana on hand. Mana and other bonus items are scattered around the level, so dodging firefight while picking up goodies becomes a necessary tactic. Many goodies are hidden behind secret doors, especially the rarer kinds such as invisibility potions and proximity bombs. The game also includes puzzle elements in the form of switches and buttons you will need to find and activate. There are too many jumping puzzles that require precise timing and coordination for my taste (Ultima VIII, anyone?), but at least they are few and far between. Quick timing is also a must to dodge rotating gears and other dangerous equipment.

Although the gameplay is derivative of Gauntlet, the graphics, as you can expect from a Raven game, is anything but outdated. You view the action from the top-down perspective similar to Take No Prisoners, but the world is in full 3D, with a constantly shifting perspective. Since the game is in true 3D, you will be able to drop down holes, ascend staircases, and ride elevators through all 28 multi-layered levels. Anyone with Direct3D-compliant cards will be treated to a smoother, anti-aliased version, complete with the cool colored-lighting effects common in today's 3D games. The prerequisite multi-player modes are excellent, although unfortunately hot-seat play is not supported so you will have to find opponents on-line.

With a solid gameplay, great graphics, and the same addictive furious action fans of Raven's other titles are familiar with, Mageslayer is yet another underrated classic from experts in the genre. 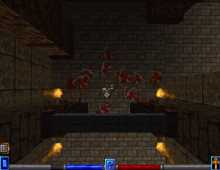