Fun, unassuming sequel to Mad Mix, Topo Soft's interesting Pac-Man clone. In this second outing, the Spanish version of Pac-Man is presented in outstanding isometric graphics, with the third dimension used to great effects: our hero can jump across tiles, as well as utilize "warp tiles" at the corner of the board. The gameplay remains decidedly un-original, though-- gobble up everything in sight and avoid ghosts. This makes Mad Mix 2 repetitive after a while, but at least you will have fun before you get bored of the game. If you are a Pac-Man fan, Mad Mix 2 is well worth a look. 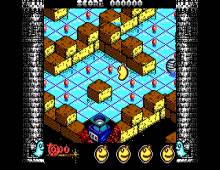