Machines of Destruction is a very fun - but also very difficult - arcade/racing gem from Fallen Angel Industries. Best played in multiplayer mode, the game, in the developer's words, is "...a mixture of racing through a circuit and wasting your opponents with a combination of the guns mounted on your car, best played on a LAN. By using the Weapons Designer, you can tailor your guns exactly to your needs, but not without a price tag! Start a game and chat in the lobby with other joiners. Unlimited spectators can join also, on top of the maximum of 4 players. Choose from either a race, a deathmatch, or ?ion Soccer?, in which mode the players are split into two teams and must carry and then 'kick' the metallic ball through the goals. Holding the ball for too long will make it red hot, and very dangerous! MoD supports the addition of 3 bots to the game, each replacing a player, and are capable of participating in every game mode just as the players would. On top of all that, the game sports nice special effects, stereo sound, a large list of performance tweaking options, easy-to-use help services and an MP3 player."

What makes MoD different from most games in the genre is the excellent range of customization. The Weapons Designer is a lot of fun because there are so many possible combinations and permutations of various components that span several categories ranging from types (energy, etc.), rate of fire, effects (incendiary, radioactive, knockback, etc.), projectile speed, weight, and many more. Creating a "super" weapon is crucial to winning the "race," especially since computer-controlled bots are extremely good, and seem to always have better weapons than you do. Playing multiplayer mode is easy to set up, and is quite addictive. I experienced some lag during a multiplayer game, but it did not last the whole game and merely delayed the action for a few noticeable seconds. With polished cartoon-style graphics that are up to FAIND's usual standards, excellent Weapons Designer feature, and plenty of frenetic action, Machines of Destruction is highly recommended to action fans, especially those with superhuman reflexes ;) 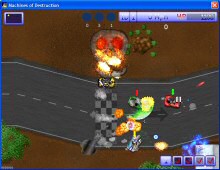