LockOn is a fun arcade-style "retro" shoot 'em up that is remiscent of Asteroids, Robotron 2084, and Tempest in equal measure. The idea is simple: survive long enough to get the high score by avoiding shots and shooting back. A 360-degree shooter coded with Game Maker, lockOn truly captures the feel of classic arcade games with simple-yet-original graphics, very fluid gameplay, and frantic action. The game is also fairly difficult - after the first few minutes I find myself surrounded by enemy fire from every which way.

The game also adds features that are not seen in most shooters. For instance, there is "wind effect" that affects the speed and direction of your movement. You can note how strong the wind is and which way is blowing by observing the smoke and fire on the screen. You also get a crosshair to help target enemies, and the direction and speed of your shots are directly related to your own movement. The playing field also "wraps around," making the arena virtually limitless. If you enjoy "abstract shooters" such as rRootage or Noiz2sa, you will definitely find a lot to like in this fun game. A very impressive game from a lone author, lockOn will hook all action gamers for hours on end. 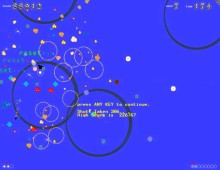