Living Ball is an interesting and innovative pinball game that unfortunately is long on concept, but short on gameplay. Billed as "world's largest pinball game," the game definitely matches that claim: each of the three tables span 100 screens or more, so you will see only a small portion of the table most of the time.

There are three ways to play this game: adventure, arcade, and bonus stages. The adventure mode is what sets Living Ball apart from other pinball titles. Here you must play the three tables in order - each table is linked to the other in some way, which you must discover. The arcade mode is where you play a typical pinball game: select one table to play. The bonus stages mode is where you can play secret bonus stages. These stages can be played only by triggering specific events in the adventure mode.

The tables, aside from being very large, are not very interesting. The Wasteland table is probably the best of the bunch (the other two are Antartica and Heavy metal), but it still has vast areas of mostly background graphics. The graphics are adequate but not spectacular, and the action and bonuses only average compared to the likes of Extreme Pinball or 21st Century's pinball games. In short, Living Ball will go down in history as one of the more unique pinball games ever made - but gameplay wise, there are simply far better games out there. Too bad the innovative ideas are not matched by good execution. 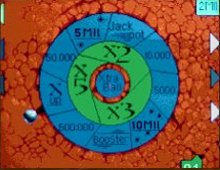