Quite an improvement from the first game in the series. Of course nearly 7 years have passed so that has a lot to say as well since PC game programming has been developed as well. As in the first game you can select between different characters when you start the game and also have the option to play many human players at a time (note that if you select more than 3 it will end up with that you control at least 2 characters at a time which is very hard and confusing).

The actual game engine is still quite the same as in the first game but with a lot of minor improvements. You can now also move around at a larger area which makes it a bit more challenging but also needed if more than 3 players at fighting at the same time. There are also more weapons and magic included although the computer got a bit too much of it in my opinion.

Overall a fun and challenging fighting game that, while it's close to games like Double Dragon, still is unique simply because of the character animation and moves involved. A decent fighting game but could still see a few improvements both regarding the controls and moves included since that is still limited.

Little Fighter 2 is an outstanding sequel to Little Fighter, one of the best beat-em up games ever made, bar none. Like the original classic, Little Fighter 2 is cute, charming, incredibly addictive, and free ;) The game basically lets up to 8 players, any of whom can be computer or human-controlled, join the all-out fistfights that feature cute Japanese SD-style graphics and cool weapons.

Little Fighter 2 features the same addictive gameplay of the original, with many more features and even better graphics and animations. Characters from the first game return in this sequel, and thankfully they are not as ?little? as the first game ?making the cool special attacks a lot more fun to pull off. The controls still take some getting used to as you need to memorize keyboard commands, but the learning curve is minimal. You can now play against friends over network, organize players into teams for an all-out fisticuffs, or join in the ?stage fight? mode that moves from one stage to the next similar to arcade games.

If you like beat-em ups or multiplayer games in general, Little Fighter 2 is simply a must-have. It?s better, bigger, and more fun than the original. The game isn't 100% completed in a sense that not all characters and stages have been coded, but even in its current form, the excellence is more than enough to be tried! 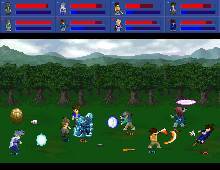