Liquisity is a fun Game Maker game from Mr. Chubigans, creator of other GM classics like Ore No Ryori and The Sandbox of God. The game is a fun puzzle/platformer hybrid that boasts 50 levels, fun gameplay, and pleasing graphics that manages to capture your attention even with the mostly-blue palette. The review at gamemakergames.com explains the highlights:

"The uniqueness of the name "Liquisity" will no doubt attract a great deal of attention in itself, regardless of the fact that this is yet another one of Mr. Chubigans' works of art. Liquisity presents itself as a relaxing and imaginative way of spending your time in a world of leisurely blue, in which you must navigate a ball into a box. Though, at first, it sounds uncannily simple, have no doubt in that there are many obstacles thrown into the fray to make playing this game time well spent.

To begin, people will enjoy the very simple but aesthetically pleasing menus that pop up. Then, upon starting the game, simple tutorials introduce all the very basics of gameplay, including the several basic obstacles that will make up every single level. In addition, the tutorials also give you the basic controls, such as using "Space" to launch your ball from the cannon, holding "Space" down longer to launch your ball with more power and using the arrow keys to control the ball through each level. The tutorials also give people a great chance to become accustomed to the well-programmed physics that are one of the more subtle highlights of gameplay.

The aforementioned basic obstacles are all used in proportion to make up each level. They are at times ideal for reaching your goal; at other times, they are nothing more than nuisances that seem to give you hell just to get a ball in a box. There are jets, which you must often use carefully to avoid having your ball blown off the screen; blades, which simply cut up your ball upon touch; propellers that deflect your ball; switches to deactivate objects (often, what a switch does is a surprise); bouncers to deflect your ball away; and even objects that change the type of ball that you have. All of these objects play crucial roles throughout the game, and they are all used in such proportion to each other, the importance of one object is never overshadowed by another.

By now, Jumper fans would begin seeing how much of a resemblance there is between Liquisity and the Jumper series, but be rest assured that Liquisity still has an ace up its sleeve. While each level provides a brand new challenge in its combination of obstacles, none of the levels are ever too frustrating or challenging that you would completely give up. Unlike Jumper, in which the difficulty is extremely great, the puzzles in Liquisity are of moderate difficulty. But, even better than that is how every single puzzle in the game tends to have multiple ways of completion. There is never any one specific way to beat a level as there is in Jumper; every person can use a completely unique approach. That alone is perhaps the most unique aspect of Liquisity's gameplay.

In supplement to all this are Liquisity's graphics. Excepting your ball and a few other objects, most of the graphics in the game are simple in both design and color, taking on a monochromatic shade of dark blue which, though it seems peculiar and almost unattractive at first, provides a wonderfully calm and relaxing mode for gameplay. Together with the sporadic burst of light music, the mood and atmosphere for the game is well spent, and Liquisity truly draws players into its magnificent yet simple world. Sound effects too are unobtrusive additions that increase the depth of the game; especially the bubbling sounds which are almost always present in the background of the game, and give Liquisity its watery theme, improving on the sensation of serenity and tranquility simultaneously.

Within Liquisity, players will find a delicate balance of simple yet refined and high-quality graphics that will satiate even those hungry for commercial-grade eye-candy; just as simple and enjoyable gameplay that is at an ideal difficulty level; music that tickles the senses and colors that place people in an unimaginably serene state of mind. Such a game as Liquisity comes with nearly no room for improvement. If a sequel were ever made, the only thing that would have to be added is more levels, and everything would be set. No doubt that with such positive highlights, Liquisity is soon to become another renowned work of art from one of the best striving freeware artists of today." 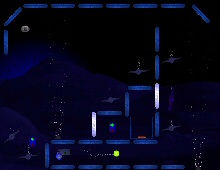