Liero is an excellent two player Worms style game. It is different to worms in that it is in real time. Don't mistake this for crappy imitators like NiM. This is not actually original. It is a clone of another game called Molez. Most people think it's the other way around. However it is much better.

You can play 1 or 2 player modes. Both modes are played with a split screen. You select 5 weapons from a list of about 30. Some weapons are better than others. Such as spike balls or big nukes. You can fully customise the game. Choose between different game modes such as capture the flag or kill em' all. You can also set weapon loading times which make it either fast paced or slow and accurate aiming. Also worm names and weapons are editable. It is a very good and has quite a big community, which means that many weapon and level editors are available for it. It comes with a basic level editor anyway. Many fan sequels have also been made, but none are as good as the original. You control a worm with an arsenal of weapons and a grappling hook. It may seem like Worms, but it controls very differently. Worms is good in a different way, so it would be unfair of me to compare.

I would definitely recommend this as it is very good. One big flaw though, is that the computer AI is very bad and it is very easy to win against it. Also it doesn't wok under windows XP. But if you have a friend to play it with and you don't have XP, you should get it.

A really nice game, "An earthworm simulation game based on a real physical model." it says in the description, well - I'd more describe it as a game a little bit similar to Worms. Objective: Blow up your opponent. To do this you get a set of 5 out of 40 different weapons, such as Uzi, Flamer, Laser and some nice others you'll soon love like I do ;) Good thing to kill your aggression, play either against a human opponent or the computer - fun for a long time.

Best described as "Worms done right" (that is, not turn-based), Liero is an incredibly addictive third-parson, 2D deathmatch style game in split-screen mode designed to be played against a friend (although computer opponent is available). There are four game types, including "Kill 'em all", "Game of Tag", Capture the Flag" and "Simple Capture the Flag," all of which are very addictive.

At the start of each game, you choose 5 of the 40 weapons provided. That's right-- 40 weapons, and they are not all shotgun variations, either. These include bazookas, mini-guns, banana bombs, and many other creative weapons that you have to use to find out what they are. The game looks a lot like Worms 1 (in fact, you could say it's a clone), but in my opinion is much more fun because you play in real-time instead of turn-based mode. One of the game's strengths is that it is highly customizable. You can change most settings in the game, e.g. Lives, Health, Reloading Times for your Weapons, Player colors, and so on.

The author describes the game as "an earthworm simulation game based on a real physical model," and he's not kidding about "real physical model" bit. The game not only obeys the laws of physics, but feels real. The "Ninja Rope," (a concept "borrowed" from Worms 1) really feels like an elastic string, and the trajectory of bullets follows realistic curves. And of course, I have to mention the gore, which is definitely one of the game's attractions: when you blast enemy earthworms, you will see their blood splattered on the screen, quite realistically. Okay, so it may not be a politically correct game, but since we're talking about earthworms drawn in cartoon style, I don't think anyone can blame Liero for cultivating a violent streak in kids ;)

There's no better proof of the game's addictiveness than the fact that there are dozens, if not hundreds, of Liero fansites on the WWW, and numerous fanmade levels and clones. One of the best fanmade add-ons to the original is Johan Otterud's level editor, aptly named WormHole, which lets you design your own Liero levels, by using any of your favorite graphics software. He also designed Liero Graphics Editor and Blood Increaser, two excellent add-ons that I guarantee will tremendously increase your enjoyment (and gore ;)) of the already awesome game. If you're an action fan, and especially multiplayer action fan, Liero is a must-have. 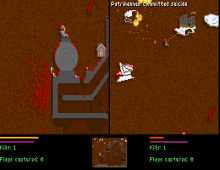