MoleZ is extremely brutal and violent mole shoot'em up for two to four players. You are a mole armed with a wide range of different weapons; from shovel all the way to the rocket launcher and nuclear grenade! Your only purpose is to kill the other moles or at least hurt them as much as possible.

It's a bit like Worms (from Team17) without those cute pink worms and with much more blood, guts and playability. And it's all in real time as well. MoleZ became almost a legend, at least in Finland. It started a whole new genre of "side view underground digging and deatmatching" (or real-time Worms) games. Several clones (for example Liero) have been made from it since and I don't think I have to describe Liero further.

While Molez doesn't have the same humor as seen in a game like Worms it is still fun to play - just in a different way. Of course it you could still say it is a funny since it is pretty much entirely based on multiplayer which of course is always to play in - unless you are of course the one losing every time.

Molez is an excellent deathmatch game for up to 4 players, in a style similar to Liero and Worms. You control the tiny moles, armed to their teeth with 5 weapons you can select from the 15-20 available, and your objective is simply to blow other moles to smithereens. The variety of weapons and items are what make Molez stand out from other Worms clones. You can use grappling hooks, chainguns, molotov cocktails, flamers, etc. The sound effects are excellent, and there is plenty of weapon effects to make the game more enjoyable (the blue tint that plasma cannon blasts light up cave walls with is my favorite).

The only big downside to Molez is that the screen is a tad too small, especially in 4-player mode. That, and the fact that Liero is a better game. If you love Liero and never gets bored with it, then there's really no big incentive to try this one. On the other hand, if you have played Liero to death and are looking for another solid Worms game, Molez fits the bill. It's fluid, it's easy to learn, and it's a lot of fun. You just have to squint your eyes a little bit to see the moles ;) First released as shareware, developer FRACTiLE Games released it into the public domain in 1999. 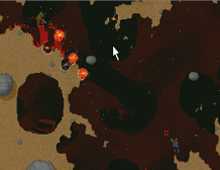