Legend of the Seven Paladins (a.k.a. Rock 'n Shaolin)

One of the most elusive FPS games ever, Legend of the Seven Paladins (a.k.a. Rock 'n Shaolin) is a decent Taiwanese FPS coded with Ken Silverman's Build Engine. The game's developer Accend apparently used the Engine illegally as the deal with 3D Realms was never assigned, according to Joe Siegler's words: "We had a deal with an Asian company to produce a game, but the deal was never actually signed and delivered. However, they were working on the game anyway, and released (to our knowledge) only a demo. Since it was never widely available over here in the states, we never legally pursued them over it."

Although Legend of the Seven Paladins was indeed never released commercially, the full version (the one you can download here) was actually finished and "leaked" onto various BBS's (mostly in Asia) by warez groups. The game, once you get used to the not-so-intuitive status bars at the top, is actually not bad at all. You play a hapness hero who was sucked mysteriously (of course) from the modern world into China's past. You are now apparently one of Shaolin Temple's famous kung fu heroes, and your job is to unravel and dissolve a brewing conspiracy to overthrow the dynasty.

As you can expect from a Build game, the environments in LOTSP are fully destructible, although there are unfortunately much less detail in the scenery than Blood or Shadow Warrior. The weapons are fun to find and use, covering a wide range of mythological and historical weapons. Some levels also feature devious traps you have to figure out how to destroy or bypass - a nice change from the usual carnage. The monsters you face are not memorable, but they present a decent challenge with sheer number. Accend also tweaked the Build Engine in some nice ways, such as giving you the ability to look up and down.

All in all, Legend of the Seven Paladins may not be the best Build game ever made, but as far as FPS goes, it is not bad at all. It is a better-than-average shooter with unfortunately bland enemies and level designs. Somewhere between the horrible Tekwar and the classic Blood, in other words. 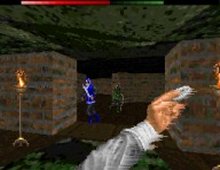 Legend of the Seven Paladins (a.k.a. Rock 'n Shaolin) screenshot

People who downloaded this game have also downloaded:
CyberMage: Darklight Awakening, House of the Dead 2, The, Nightmare Creatures, Kingpin: Life of Crime, Mageslayer