Legend of the Mystical Ninja (a.k.a. Ganbare Goemon: Yukihim

Ahh... the memories. This was one of the few SNES games I played and really liked while growing up. As a "die-hard" PC gamer, I tended to scoff at what I call "nauseatingly cute" console games. Well, Legend of the Mystical Ninja (a.k.a. Ganbare Goemon - Yuki-Hime Kyushutsu Emaki! in Japan) is indeed "nauseatingly cute," but the superb gameplay and variety kept me hooked - to my little brother's delight, because this was one of the few games I was willing to play with him ;)

LMN is one of the games in Konami's immensely popular Ganbare Goemon series in Japan that stars Ganbare Goemon, the legendary ninja bandit who is Japan's Robin Hood: legend has it that this hero who lived in Japan's Edo period (roughly 17th to 19th century) stole from the rich to give to the poor, although that was never confirmed in written records (Hideyoshi referred to him only as a "notorious bandit"). In this episode, the story starts with Goemon and Ebisumaru (his buddy thief) loitering around town, doing their usual deeds of stealing from the rich. It's not until close to the end that you learn the troubles were caused by General Shogun Hannyu. That's not much of a story, but then again storytelling is not LMN's strength. Rather, it's the wonderful blend of platform action, a huge dose of humor, and the excellent variety of gameplay that action gamers will enjoy.

So let's talk about gameplay. The game is played in typical 2D side scrolling fashion, and two players can play the game simultaneously (one player controls Goemon, and the other Ebisumaru). The fun lies in the hilarious antics of Goemon and his enemies, as well as a good variety of weapons and special items you can buy. Part of the fun of Goemon for me is the use of Japanese myths and cultural icons throughout the game to represent different elements of gameplay. For example, in addition to killing enemies with his long pipe, Goemon can buy passes, use sandals, buy fortune dolls, etc. The best part of the game, though, are the many mini-games you can play within the game. You can play the whack-a-mole game, gamble away your coins, bet on a horse racing, play the Gradius mini-game, and many more. New levels would introduce new mini-games (accessed when you enter the right shop), so the game never gets boring.

Overall, if you like platform games, especially ones based on anime/manga series, you will love LMN. This version was released for the now-obsolete Super Nintendo system, but if you own newer consoles like the Nintendo 64, check out new Goemon sequels in this charming series that is very popular in Japan, but quite underrated elsewhere. 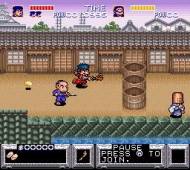 Legend of the Mystical Ninja (a.k.a. Ganbare Goemon: Yukihim screenshot