Last Rites is one of the most obscure first-person shooters ever made. But unlike underrated classics such as Wrath of Earth, the game is obscure for a good reason: it is horrible. The Games Domain's uncompromising review says it all about why you should avoid this Real Dog like a plague:

"Last Rites takes as its plot the basic zombies-taking-over-the-world scenario. Except that the apocalyptic event takes place in the future, thereby ensuring a supply of hi-tech weaponry with which to clobber the walking dead. Because that's exactly what you'll be doing. You play one of the survivors of the zombie plague, commander of a Special Forces unit given the task of ensuring humanity's survival. Helpfully, this task has been divided up into about thirteen missions, with different goals to be accomplished. Succeed, and humanity may yet survive. Fail, and you'll end up as a la carte zombie food.

You're not entirely alone in your exploits, because for at least half the missions you have a team of four other crack-commandos with you, to pull your butt out of the fire, give you covering fire, take out zombies with precision-mounted attacks, and.. well, that's not strictly true. While you do have four commandos to accompany you, they're not much good, even when you crank their strength up to maximum. You can't give them commands, as you can give wingmen in most flight sims. Nor can you expect them to stay in any sort of formation. They'll wander around in your general vicinity, blasting any zombies they see, but they don't actually try to get out of the way of any attacks. They'll happily stand in front of a zombie, shooting over their heads while the zombie tears their guts out. And during indoor missions, they have a tendency to get stuck in rooms and not follow you. Basically, you can expect them to snuff it within the first couple of minutes of a mission. Looks like you're on your own. Pretty much as you are in every other 3D action game.

Last Rites falls flat in the graphics department, too. The sprites are all poorly animated and blocky, and the background graphics are poor. Let's take a couple of examples - the city is made up of hundreds of repeated (and identical) building fronts, complete with windows and doors. Can you enter a single one of them? Nope. And at one point you enter a shopping centre ('mall' to Americans), a la Dawn of the Dead. Except it looks nothing like a shopping centre.. there are grey walls all around, no shopping related items or decorations to speak off.. it looks more like a car park. And the game is ridiculously slow and jerky - slower than Quake, even. On a P133! What the hell's going on, Ocean?

The controls are pretty duff too, whether you opt to play with the mouse or keyboard. There's no auto aiming system, so you need to move your sights up and down. Except that the view up and view down keys are so over- sensitive, you'll be lucky to get a precise shot in. The mouse controls are crap, too... turning on the 'Virtual Head' system seems to result in the controls become virtually unusable. And on top of that you can only strafe left or right using one key for left, and one for right (Quake players will know what I mean), so you have to abandon the directional controls, meaning that you can't dodge properly while moving. Basically, Last Rites is a pretty crap effort. What could have been a good game which started off with a decent concept is ruined by poor gameplay and unforgivable faults and flaws. Put this back in the ground, Ocean it stinks to high heaven. One to avoid." 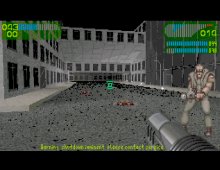 People who downloaded this game have also downloaded:
Damage Incorporated, House of the Dead 2, The, CyberMage: Darklight Awakening, G-Nome, Legend of the Seven Paladins (a.k.a. Rock 'n Shaolin)