Damage Incorporated is a fun but little-known first-person shooter based on the Marathon 2 engine that Paranoid Productions licensed from Bungie. The brief description at MobyGames goes as follows:

"...[Damage Incorporated] incorporates a number of real-time strategy game mechanics to create an interesting hybrid game. The game takes place in modern day, and the player is cast as a sergeant in the Marine Corps. in charge of a team of thirteen Marines. The player is sent on a long sequence of covert missions fighting various rogue militia and paramilitary organizations based in assorted locations around the United States. The player takes up to four squad members on each mission, and though he is not always required to use them, the missions become significantly easier if he does. Squad members are extremely chatty and each have well defined personalities. The squad members can die during combat, resulting in the player potentially being short on men for the later missions. The game also includes a separate multi-player game where players can each have their own squad, resulting in some chaotic battles."

The game is perhaps best described as a primitive version of Rainbow Six: it has real-world weapons (e.g. the MP5, M-16, and more) with different kinds of bullets, actual locations, and interesting "what-if" scenarios. The levels are huge, each with many different kinds of enemies. What I like most about Damage Incorporated is that you can command specific Marines, each with his own personality and skills. For instance, a soldier codenamed Carnage is very strong, but mentally unstable. Choosing the right Marines for each mission is crucial to your success.

On the downside, the graphics look more like DOOM than a 1998 game. People and texture-mapped scenery get pixelated when you run close to them, and the Marines sometime get 'stuck' between walls or run into invisible barriers. But excellent sound effects make up for this letdown: you will hear your teammates talk over the helmet headphones, as well as authentic sounds of weapons and explosions. The game also has excellent multiplayer support, and Deathmatch mode over the Internet is especially well-designed.

If you enjoy "realistic" FPS like Rainbow Six that offers more than typical kill-everything-in-sight gameplay, and you are not already spoiled by 3D-accelerated graphics of 21st century games, check out Damage Incorporated. It is easy to get into, has plenty of levels and fun weapons to use, and has more than enough replayability to keep you coming back. Highly recommended. 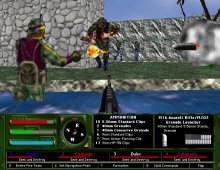