Kwik Snax is a sequel of sorts to Fast Food, and is the second Dizzy arcade game released for the PC. The plot: evil wizard Zaks has imprisoned four members of the Yolkfolk on four different islands, and you have to rescue them. Each island consists of several sub-levels where you have to eat all the fruit (sounds familiar, eh?) The monsters are removed by pushing blocks around, but they'll reappear after a short time. There's also a bonus level where again you must collect as much fruit as you can, but this time, the floor is made of ice.

Like all other Dizzy games, Kwik Snax has excellent graphics and sounds. Unfortunately, like most of the other Dizzy arcade games, it's far too easy and it won't take long for you to complete. Oh well, at least the straightforward gobble-up-fruit gameplay of Fast Food is enhanced somewhat by icy floors and movable blocks. Recommended only for die-hard Dizzy or Pac-Man fans only. 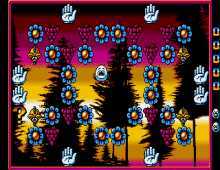