Yet another well made and simple game from Codemasters (also behind the Micro Machines series). You are this little round fellow (ball) and you have to collect diamonds and other important (not) stuff. Of course you have to avoid the evil ghosts who are out to catch you.

There are many different levels each being a bit more difficult once you get further into the game. The the usual arcade style game mode where you go from one screen to another once you have have avoided all the traps on te current screen. Magicland Dizzy is a good game if you want to relax and a bit and waste some time.

Magicland Dizzy is the second Dizzy game for the PC, fourth in the series overall. This time, the evil wizard Zaks is back and has done some strange things to the Yolkfolk - Denzil is trapped in a block of ice, Dylan is in a slumber, Dora has been turned into a frog, Daisy has turned into a giant, and Grand Dizzy is stuck behind a mirror! Dizzy managed to defeat Zaks before, so can he sort him out another time?

Gameplay will be familiar to Dizzy fans: adventure-style puzzle-solving (complete with inventory items) with some frantic action. As well as rescuing the Yolkfolk, you must also collect 30 diamonds (shades of Super Mario here). Unlike the first three adventures, Dizzy now has an energy bar as well as three lives, so the game is much more forgiving than Fantasy World Dizzy. Sound and music this time have also been upgraded to Adlib/Soundblaster, so PC gamers can now hear what Spectrum gamers have enjoyed for years. Overall, nice graphics, nice tune, nice game - what more can I say? Highly recommended! 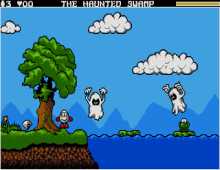