The "forgotten" Titus game, Knight Force remains today a very rare find-- even the original Amiga release is hard to come by. (Until now, that is ;)) The reasons for its obscurity is somewhat mysterious, given that Knight Force is a better-than-average platformer that is at least far superior to Wild Streets, which was moderately successful in stores. The plot is nothing to write home about: you play the part of "the Knight of Thunder," hero of the Belloth people, who is tasked with rescuing Princess Tanya from the clutch of Red Sabbath, the evil sorcerer.

What makes Knight Force a bit more interesting than a typical platformer is the variety of levels: you will travel to 5 time zones, ranging from prehistoric, medieval Versailles, present-day New York City, future Earth, and an alien world ("mystical" level). Each zone has its own enemies, background scenery, and amulets you can find to increase your knight power. The game's strongest point is the graphics, which is much richer and more detailed than most platformers at the time. New York City and the final mystical level in particular are very 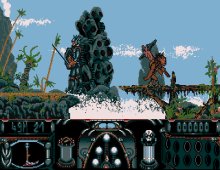