Karnov is another excellent arcade conversion by Quicksilver, this time casting you as rotund, fire-breathing Russian by the name of Karnov, who's on his quest to recover the lost treasure of Babylon from the evil dragon Ryu. Although it may seems like a standard platform fare, what makes Karnov very addictive is the huge variety: each of the game's nine levels is packed with new terrain, monsters, and power-ups to collect and use. In contrast to other games, some items you can collect in Karnov are non-weapon items that are extremely useful. For example, a ladder gives you access to the upper elevation where you might find hidden items, or even secret passages in underground caverns. Many levels also have alternative routes, which are useful for when the going gets tough.

The problem, however, is that those alternative routes will often turn out to be as tough as the one you left-- Karnov is a very difficult game that will likely frustrate everyone but the most expert and dedicated players. You only have five lives to make it to the end of the game, and fifty coins are required to get an extra life. Given that those coins are hard to come by, and many monsters seem to dodge Karnov's fireballs with ease, those extra lives don't come cheap. If you are confident of your reflexes and have a lot of patience, though, you'll have a lot of fun with this game. 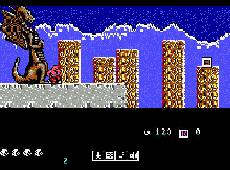 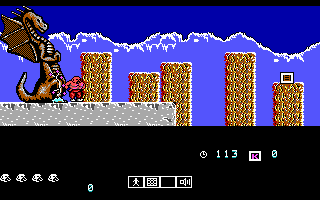