Kar-nage is a fun isometric car combat game from Fallen Angel Industries, indie developers of several excellent freeware titles using the Klik & Play application. The game is the first car combat game released in the Klik community, and is well worth a look by action fans.

Kar-Nage is essentially a no-holds-barred car combat game - you drive a fully-armed car, trying to destroy other cars in a vast arena that spans several screens. The game's bright, cartoony graphics belie the complex engine that uses complicated calculations to create realistic car physics, including fishtailing, ramming, peel-out, etc. Kar-Nage features many primary and secondary weapons, as well as car upgrades. In single player mode, you will work your way through various arenas build your ultimate car from four different characters. In two player mode (hotseat only), you will duel with a friend to the death. The controls are very intuitive: use the left and right arrows to steer, the UP arrow to accelerate, and CTRL key to fire your weapon. Unfortunately, there is no reverse button in the game, but the furious action makes this omission negligible. Overall, nonstop action, cool upgrades, and great soundtrack makes Kar-Nage one of the best Klik & Play games ever made. Highly recommended! 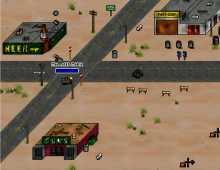