Another fun action freeware game from Japan, Kurukuru UFO lets you pilot a flying saucer around the arena. In contrast to a typical shooter, you cannot control the firing direction of your saucer: in this game, your 'gun turrets' are stars (usually one or two) that rotate around the ship. These stars indicate your firing direction, so you must carefully press the fire button precisely when the stars line up with the targets. To make things more difficult, your flying saucer takes damage when it touches any of the four edges of the screen, so you must control the movement carefully - inertia plays a role here similar to Finnish cavefliers.

There are several game mode in Kurukuru UFO: battle, time attack, vs, and a secret "extra" mode you can only unlock after getting enough score. Battle mode is a duel in which your goal is to destroy the opposing flying saucer in each stage before it kills you. In time attack, you must destroy all targets on the screen as quickly as possible. While I find this mode the most fun, it is also frustrating because the time limit given is sometimes far too difficult to meet. VS mode is similar to battle, except that here you can fight against another human player.

With crisp anime-style graphics, fluid animations, and fun gameplay that introduces some new features into the genre, Kurukuru UFO is another addictive shooter from Japan that fans of innovative shooters should definitely take a look. Highly recommended. 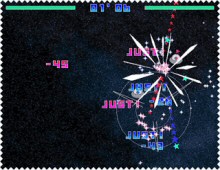