Kaeon is a little SHMUP that was never finished, with only three short levels, so-so graphics and an extreme difficulty. It's a little pity though, because it had potentialities: five parallactic backgrounds were quite a rarity on a PC in 1992. Instead of the usual predefined levels, difficulty can be set through variables like the effects of wall collisions on the ship and the frequency of enemy fire - if you want, you can be invincible. The Bosses, though graphically shabby like the rest, are well done, with many parts to destroy before they succumb. Overall, Kaeon feels like an "embryo": if brought to the end of the development, the result could have been a nice game. Only for die-hard SHMUPS collectors. 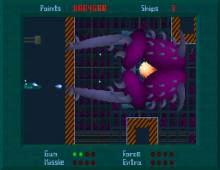