Jumper 2 is a great platformer/puzzle hybrid coded in Game Maker. Although I find the game too difficult for my deficient reflexes, interesting level designs and the cool skid/jump maneuvers keep me coming back for more (masochistic) fun. Shaltif's excellent review at Gamemakergames.com says it all:

"This is one of the best platform games I have ever played. If you want a game that is easy to get into and hard to put down, then you need to check out Jumper 2.This is the sequel to the original Jumper, made by the same author. It comes packed with more action, puzzles, and surprises then ever before.

Game-Play: This is where the Jumper series shines. Jumper 2 starts off with some nice tutorial levels which tell you everything about the Jumper world and how to control the main character, Ogmo. The main object or goal is to get Ogmo from one level to the next by moving to the finishing position (like most platform style games). As always though, that is easier said then done. Each level is riddled with spikes, ice, falls, and other potential hazards to prevent any access to the exit. Make sure you've learned the new wall kick and skid jump maneuvers, as they are needed quite frequently.

As you go, the levels progressively get more difficult and more interesting. Getting far in this game requires that you expand, combine and stretch Ogmo's abilities to their absolute limits. Using Ogmo's moves and paying close attention to each level's layout is a key to achieving victory. Luckily for us, there are no life or time limits. Don't be alarmed if you die a few hundred times or if it takes an hour as your trying to get past a level (especially the latter ones). Just keep at it and eventually you'll be able to move on.

Unfortunately, this is one of those games where you'll be playing the same level repetitively until you finally get to the exit. For those of you who easily get frustrated or bored by repetition, you may not care for this game at all. However, most people don't seem to mind this as much as to set it down and never play it again.

Life-Span: Unlike the original, this game has got some major upgrades when it comes to the life-span and replay ability of levels. In the original, the only objective was to get to the finish. That kept it really linear and once you were done, that's it. In Jumper 2, however, we now have crystals to collect, times to break, and secrets to reveal. Once you beat a level, you can always go back and try to collect the two hidden, and usually hard to reach, crystals. The blue crystals are always visible and can be collected even on the first run of a level. After you complete a level with collecting a blue crystal, then you need to replay the level to collect the red crystal. The red crystal is usually at a harder to reach place than the blue one. These crystals are then used to unlock secrets. By collecting more crystals, more secrets are revealed to you.

Once you've got the crystals, what else is there to do? Why not trying to lower how much time it takes for you to complete a level. So you can brag about how quickly you accomplished a level or work really hard trying to beat other people's fastest times, and that's not even all of it. There are lots of secret items, game mods, art, stages and even skins to unlock. If anything, it's going to take quite some time for even the best player to complete this game.

This game is very easy to jump into. Anyone who can use the arrow keys on the keyboard should have no problems with the first few levels. However, it does get a bit challenging on the latter stages. Be prepared to die a few times here and there. As long as you keep working at the level, you will eventually advance to an even harder level.

[The game is extremely] well done and thought out. It comes with a large variety of levels and secrets which make it a long-lasting game (which I like a lot). An excellent sequel to an already well known game. I can't wait to see how this game unfolds as I haven't fully completed this game myself. If you haven't seen any of the Jumper games, then you need to get them now. You won't be disappointed." 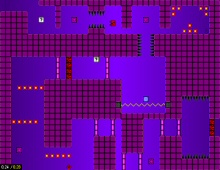