Jump is a cute little Space Invaders clone from Spanish developer Opera. The game plays like a standard shoot-em-up, except that instead of shooting up at incoming aliens, you instead jump down at blocks beneath your feet to crush bugs that are crawling up from the bottom. That's about all there is to it, but the game gets a bit more interesting in later levels, when you face nastier bugs who cannot be crushed with one block. One inexplicably bad game design is that you must jump on each block three times before it would fall down. This makes gameplay very difficult and tiring for me, since my fingers got tired from all the jumping pretty quickly. Still, might be worth a look for anyone who likes Space Invader type of games.

This is a great game, which bears some resemblance to classic Space Invaders, but with a twist. You are standing on blocks, and you have to stomp the blocks and crush the bugs before the bugs climb up. As you progress up through the levels, the bugs get faster and harder to kill. So in some ways it is the same as Space Invaders, but only in the sense that things are coming for you in droves, and you have to kill them first.

The graphics in Jump are very good, the colours are amazing. Quite like those of Commander Keen 4 and other games of that era, great for 1992. 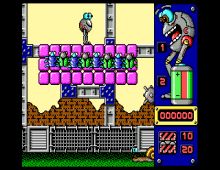