Taken from the developer's site "Jetpack was an immediate hit when it was released in 1993, and a cult following grew internationally. I received a ton of mail and submissions by people creating their own jetpack levels. The built in level editor is one of the most popular features - over 1000 levels have been created. Some teachers bought Jetpack because they considered the editor to be educational, encouraging their students' creativity. Jetpack was the top selling game for both publishers that carried it (Software Creations and Impulse Games). Jetpack runs fine on an 8086, and surprisingly well on today's computers!"

Jetpack mostly reminds me of a good but simple Commodore 64 game since the gameplay is very simply but still highly addictive. The levels are easy enough so a beginner still has a good chance of completing the game and each new levels offers just a bit harder gameplay without making it too difficult which I really like in games. After some levels you get a bit bored though as the game basics really doesn't change and each level is just "the cat after the mouse" where you have to collect the needed items without being caught by the robot or monsters.

Jetpack is a decent arcade game but it quickly gets boring because of the very simple gameplay but there are certain levels that are really a challenge. Because of the included level editor that are quite a few great levels created by other players so if you need an additional challenge in the game head over to the developers' website and download additional levels.

Released in the early 90's, Jetpack is a game where you are an adventurer who explores different levels with a jetpack strapped to your back. The levels are full of treasures including crystals and golden coins and also dangers including marble worms and robots. Your mission is to collect all the green crystals on each level and get through the door without getting killed. Each level is a full screen size with small graphics. There is also an option to create your own levels and thrash them out too! Very addictive!

Jetpack was great! I remember this being one of the games I would never delete off my computer. There were hundreds of levels, which meant that you were entertained for a long time. Some of the harder levels made my head hurt =

It's a really fun little puzzle game, which is easy to get the hang of right away. You are this cool lil' dude with a jetpack on. Your task is to collect all the emerald gems and then move onto the next level. At first it's easy as you get used to your jetpack and phase shifter that lets you burn holes through specific walls. Some walls are denser than other walls, and therefore take longer for you to get through. Some walls you cannot go through at all. There are other items to collect, like gold and jetpack fuel. You're gonna need fuel on the bigger levels, as the jetpack doesn't come with a bottomless supply unlike McDonald's coffee.

As the levels increase the difficulty does to (What? You expected something else?), and things such as ice, and ooze are there to add another bit of a challenge. No game is complete without evil homing bots that love to follow you and springs things that want to zap you dead. Once hit you are dead and have to restart the level, which can get annoying, but there are continues galore (bonus!).

The level creator was very cool, and came included with the game. I spent ages making levels for my friends that were really hard, and they did the same for me. You are given all the elements of the game, and can create your own levels to play. "Some teachers bought Jetpack because they considered the editor to be educational, encouraging their students' creativity". It was pretty popular ;). There are a lot of fan websites out there with levels they have made. You can download and play these for more challenges still.

The sound and the graphics are what is to be expected from that time, standard PC Speaker beeps and pretty colourful squares for graphics. It is a tad outdated now, but if you love old games then you would expect what you got.

Overall, it's a fun game, enjoyed by all. I've seen quite a few Jetpack fanatic sites out there, so it must have some kind of crazy phenomenon thing going. Definitely worth a play, and don't forget to have a go with the level editor. 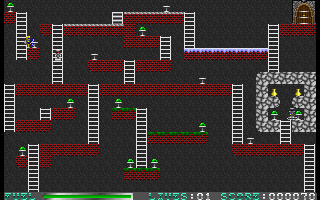