A solid PC conversion of Millennium's 1991 Amiga hit James Pond 2: Codename RoboCod. RoboCod is a fantastic, colorful platform game which improves the genre with some very ingenious ideas. The star of the game is James Pond, a secret agent goldfish (yes, fish) who gets into all sorts of adventures on a dangerous mission to stop a madman. As MobyGames describes it: "l like the way the game comes with: Creative ideas like its all-time colourful super-scroll and the ability to play a level in a reverse angle... You no longer have to worry about blind alleys like you did in games like Gods: Scretch yourself up wherever you are (there is always something on the top to grab hold of!)" There's plenty of other neat ideas and very cool levels, such as non-stop running at the top of a toy train; flying in a bathtub while having a bath(!), and always feeling the action when you move with its "amazing gravity-impetus super-scroll."

RoboCod is simply a must-have for every fan of platform games. At least the Amiga version could be called one of the best games in its genre, but this PC conversion is still surprisingly well-done. 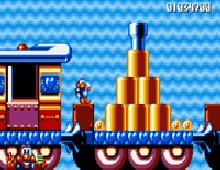 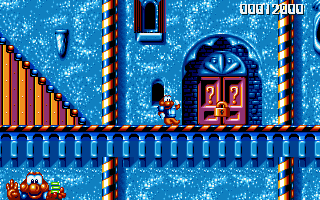