Huckleberry Hound is a straight-forward jump'n run by Alternative Software featuring the Hanna-Barbera comic character. It's your solid platform game, as used by other low-budget titles from, eg., Codemasters. Nice colourful VGA graphics - although a bit more contrast between background and foreground would have been nice, decent adlib music by Adam Gilmore and gameplay that should please fans of the genre. Give it a try if you like jump'n run games. 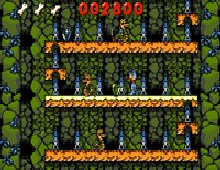