Highway Patrol II is a little-known racing game from Microids that boasts some innovative concepts that are sadly lost in lackluster implementation. As the title suggests, you play a highway patrol officer in a nondescript town somewhere in the US' desert lands. Your job: shoot gangsters that are robbing gas stations in your area. One interesting innovation is the radar screen that displays your relative position to the gangsters, as well as the police siren you can use as a scare tactic. The number of gas stations robbed is displayed at the top of the screen, and this has a negative correlation with your score (i.e. the more stations robbed, the lower your score).

When it comes down to the actual gameplay, though, Highway Patrol II is simply not an interesting game. Among the offenders are boring graphics (sands and sands as far as the eye can see...), sparse enemies, and a repetitive gameplay that consists of chasing the bad guys level after level to shoot their cars. Good for a few minutes' worth of diversion, before you get bored and go back to Quarantine. 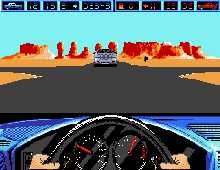 People who downloaded this game have also downloaded:
Indiana Jones and The Last Crusade - The Action Game, Highway Fighter, House of the Dead 2, The, Classic Arcade Games for Windows