Highway Fighter is a very obscure precursor to Highway Hunter, a shareware game from Russia published by Safari and later by Epic MegaGames. Although the game offers the same plot, similar graphics and gameplay - blast various baddies while staying on the road - it has some noticeable differences. First, the weapon/shield/score counter at the bottom of the screen has a different look, and is easier to see. Although unit graphics is almost identical to Highway Hunter, some levels are different. The overall game is also much more difficult than Highway Hunter - so much so, in fact, that it seems as though OIS designed this game primarily for hard-core action gamers, only to "tone down" the difficulty level later before releasing it overseas. Although it remains a very obscure game, Highway Fighter is all in English. So if you like Highway Hunter, you will definitely enjoy this precursor that is much more challenging. I gave up after level three, but I am sure veteran gamers would have no trouble blasting endless enemies. Recommended! 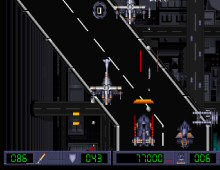