H.U.R.L. is an awful first-person shooter that tries to bring the appeal of DOOM-style carnage to kids - by replacing violence with non-violent action, and ugly monsters with cartoony ones. Chris Mullen of Games Domain explains about why this game is a turkey you should avoid: "

Instead of guns, the player is armed with a choice of three cleaning items (water balloon, soap, and, er, something else), and is set the task of cleaning up the 'Slob Zone', a heavily polluted area, occupied by 'Bob the Slob' and his cronies. That's the plot, what little there is of it. What this basically boils down to is a game in the style of the aforementioned Wolfenstein 3D. There are a number of strange bad guys, from the strangely docile 'Ricochet Pig', the egg throwing 'Quack Attacker' through to Bob himself. The action is spread across 10 levels, in different locations, (the Trailer Park, Sewers and so forth), through which the player must journey, picking up keys to unlock obstacles in his or her path. Rubbish is scattered around the game areas, which can be picked up and exchanged for more ammo, which in turn is used to fend off the advances of the cutesy nasties. Find the exit, and on to the next level you go.

Graphics and sound aren't everything. I'm the first to admit that. I'd rather companies put gameplay before graphics. A flashy game might sell a few copies, but a good game that played well would sell a bundle. Rise of the Robots, anyone? Thought not. Having said that, Hurl doesn't come up on either of these counts, sadly. The game engine is painfully slow, despite being little more detailed than Wolf3D, or Blake Stone. The baddies move slowly, and the collision detection is more than a little dodgy. Even if a baddie is only half in front of a door, you can't go through, and since baddies find it very hard to go through doors, this becomes a real problem.

The levels are also extremely short, and with only 10 in total, the game was over in a flash. There are no difficulty levels, so it's not customizable for different ages. There are only three weapons, all of which behave in the same way. The enemies all use the same attack patterns, so dispatching them is just a matter of standing near, and holding down the fire button. Not a good omen. As the level progress, there is no sign of improvement, and even the final boss is ridiculously easy to dispatch. There's also no ammo to pick up, so you end up having to make runs to the nearest litter machine to buy more ammo.. then back... you get the picture. I didn't find the game particularly interesting, but the green message may have some merit. There are, however, a lot of better titles out there, both educational, and entertaining. The idea was a good one, but in the end, it just didn't come off. There's no real challenge involved , and the whole game feels stilted." Stay away from this Real Dog if you can, unless you really feel like playing every FPS ever made. 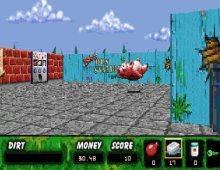